Iran all export Co. exporter of Stud bolt from Iran to Iranian border countries including Iraq, Armenia, Azerbaijan, Afghanistan, Turkmenistan, Emirates, etc.
The stud bolts are actually the interface between the galvanized sheet and the concrete. In fact, they play the same role of cutters.
The standard method of producing a cutting stud is the cold forging method that can be manufactured by special machines in Iran. This is the best method because it increases the density and uniformity of the inner steel layers, which increases the strength.
The cut stud is the most important piece in the composite structure and has different applications in different sizes in Iran.
Since these stud bolts play an important role in roof safety during harvesting and specially in earthquakes, careful selection of stud bolts should be carefully considered and the installation of studs should be carried out by experts.
Stud bolts are widely used in many different shapes and types in Iran, in a variety of industries including the Ship building industry, Heavy Construction etc…
Stud Bolts are available according to American standarda ASTM A193 and come in different glasses and grades
ASTM A193 B7
ASTM A193 B8Stainless steel
ASTM A193 B16. 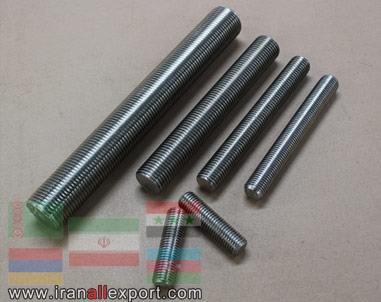 Stud bolts are the most common fastener in gas, oil and petrochemical industry and are very often used for flange connections in Iran. They are mostly used in engines. Especially when it comes to cylinder heads. In petroleum and chemical industries in Iran, stud bolts are used for flange connections. Iran All Export can provide you galvanized coating, hot dip galvanized coating and Dacromet in Iran. Stud bolts are connected using heavy nuts 2HM, 2H , 8M depending on the grade of stud bolt.